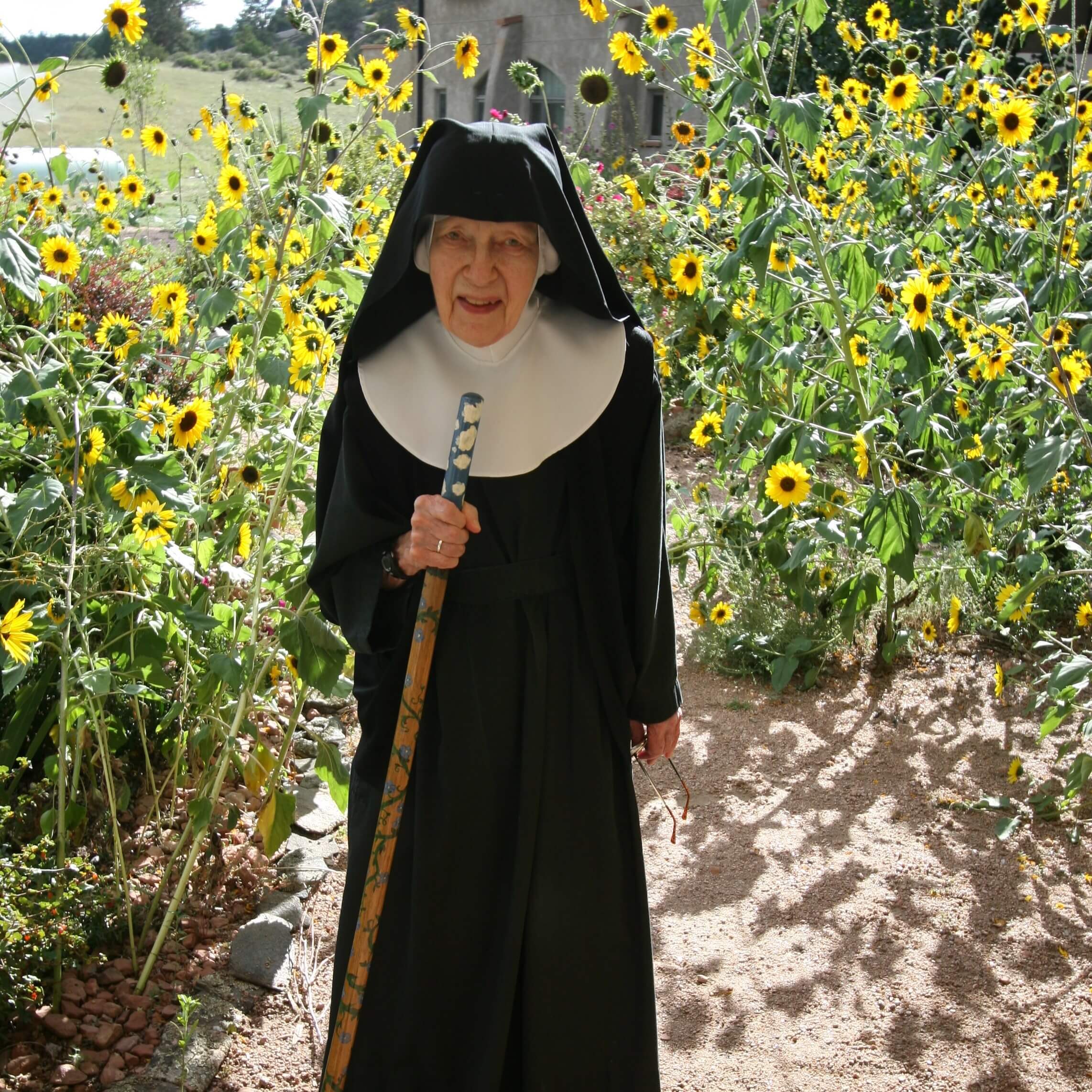 Sister Pauline was born on September 4, 1934 in Verdun, a suburb of Montreal, in the province of Quebec, Canada.  Her birth name was Marie Anna Yolande, and her father Louis LaPlante worked at a hosier factory, and mother Emerilda Chartier LaPlante had been a teacher, but became a full-time home-maker after Yolanda’s birth.  She was the only child.  At four years old, she saw a film on St. Therese and was so deeply impressed that she decided she wanted to become a nun.  After her first year of high school, her parents transferred her from the French section to the English section of the same school, in order for her to learn English.  After high school, Yolande attended a private secretarial college and worked as a secretary for the next six years.

At 19, she visited the Abbaye de Saint-Benoit-du-Lac and fell in love with the Benedictines.  In opposition to her parents’ wishes, she entered the Monastery Mont-Laurier, 150 miles north of Montreal on October 8, 1956.  She was occupied mostly with secretarial work and bookkeeping, but was also a printer for nine years.  She made her first profession on October 7, 1958 and took the name Pauline.

In 1980, she transferred to the monastery of St. Walburga in Bouder.  It happened like this: One afternoon in Fall of 1979, there was waiting in the parlor a tall, slim lady in her forties with carefully arranged reddish-blond hair. She was announced as Miss LaPlante, coming from Texas. After the exchange of a few pleasantries, she inquired when we would have Vespers and Compline, whether we said Matins in the morning or anticipate it the day before, and then she asked whether she could see Reverend Mother.  Then she “confessed”: “I am really Sr. Pauline LaPlante, a Benedictine for almost 25 years from Mont Laurier close to Montreal.  For certain reasons, I had to leave my monastery, and am now in search of a new community.  I did not write beforehand, because every monastery I wrote to either did not answer at all or denied my request of transfer.  So, I thought, if I am just here, you would not turn me out.  I only want to save my monastic vocation!”  She was close to tears. The Prioress, Mother Gertrude, agreed that Sister Pauline could stay in the guest house.  She was given some work to do for two months, and on January 25, her name-day, after a letter of recommendation from her former Abbess had arrived, she was allowed to enter.  There were no formal Constitutions nor Canon Law regulations known for a case of “transfers”.  So, after a year of probation, again on her name day, Sr. Pauline transferred her vows to our community.

She has been a most faithful and loyal member of our community, and a stellar model of a Benedictine nun.  Many people have been blessed by the correspondence she kept up as our community secretary for decades, as well as by purchasing one of the thousands of rosaries she made throughout her life. In fact, it was due to her repair of a rosary that the possibility arose for us to move to Virginia Dale from Boulder. She was known for the “twinkle” in her eye, and a thoughtful and gentle spirit that became the essence of her personality.