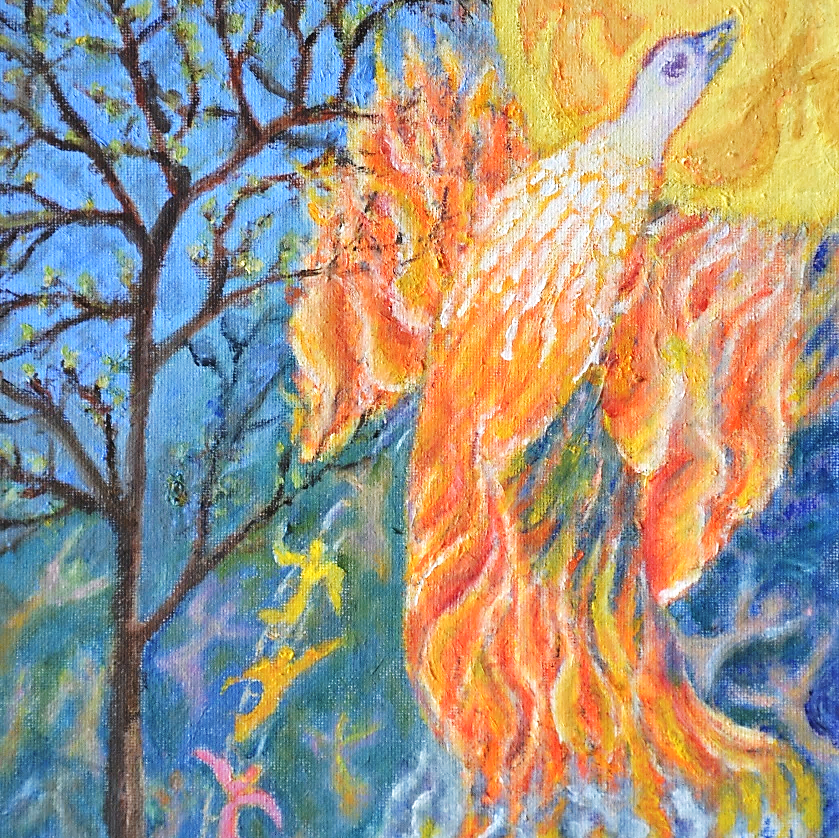 Mother Maria-Thomas wrote the following poem to accompany the first volume of her Reveries Under the Fig Tree, in which alludes to the theme she chose for her books: the encounter between Nathaniel and Jesus as described in John 1:45-51. In this passage we hear Christ telling Nathaniel that he saw him under the fig tree before he was called by Philip, which mysteriously led to Nathaniel’s immediate belief in Jesus as truly being the “Son of God” and “King of Israel.”

Our God is Coming

We don’t know what Nathanael saw that night
under his fig tree in the dark winter’s skies.
Was it a dream like Jacob had on his flight?
A vision of angels soaring up to the heights
carrying with them his prayers and tears,
bringing back God’s assuring promise of light
and protection which put an end to his fears?

Or did the Messiah appear to Nathanael,
as he once did to the young Prophet Daniel
who saw the Son of Man coming as Ruler of nations?
At the end of all time from heaven he’ll descend
as Savior and Judge from the Father’s right hand,
Offering all mankind God’s new-born creation:
Pure oceans, fresh air, and in spring-bloom the world;
in fire all hearts then cleansed from transgressions.

Look at that star over Bethlehem:
It seems to announce the place of his birth,
As Balaam foresaw in the Hebrew story:
The Magi set out from the ends of the earth,
to worship the King, precious presents they bring.
In vain did they seek him in palaces’ wealth.
They found him at last in a cold, dripping cave
on his mother’s lap while angels would sing
of peace to all people and to God alone glory.

No witness we have of that reverie
which only Nathanael himself could know.
But so far he kept it in tight secrecy
hiding this vision from his fellows below.

Now here comes this Rabbi from Nazareth,
a small unknown city of dubious fame.
The Messiah this man cannot possibly be,
as some of his followers boldly proclaim.
But his eyes pierce deep into my innermost heart:
All my doubts, my desires he seems to see
He must be the Messiah, the Son of God.

Below is the poem she wrote for the second volume of her Reveries Under the Fig Tree:

We don’t know what Nathanael dreamed that night
under his fig tree in early spr
Was it the same dream that Jacob, in flight,
saw of the angels on a ladder to God
carrying up his desires and fears,
and in turn God’s assuring response did bring?

Or did the Messiah appear to Nathanael
ready to free from the tight Roman yoke
his ancestral heritage, the land Israel
still held in bondage despite attempts of revolt?

Or was it more like a vision? Who knows?
An appearance like that to Ezekiel
who witnessed the throng of dead-stricken bones,
arising to life by the fresh Spirit’s breath
from the rubble of ashes, of fire and death?

Or did he see “Phoenix” in jubilant blaze
ascending to God out of Calvary’s grave?
taking dead humankind to God’s living face?

No witness we have of that reverie
which only the dreamer himself could know.
But he kept it so far in tight secrecy
hiding this mystery from his fellows below.

Now here comes this Rabbi from Nazareth
who beholds the deep secrets of all human hearts.
He must be the Messiah, Israel’s King
who, arising to glory from torment and death,
to all waiting souls God’s salvation will bring.