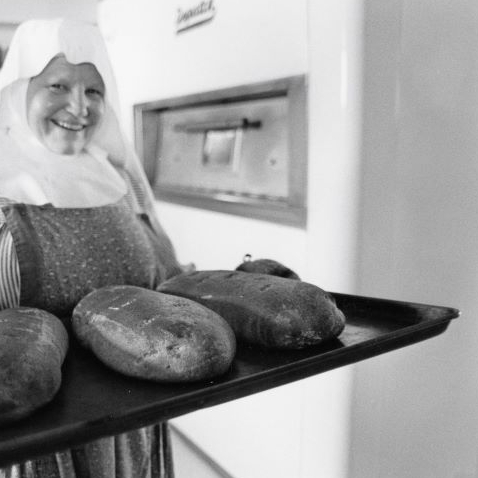 When our Sister Augustina Höchbauer died October 8th, she left many delightful memories of her caring, humor, wisdom, and love to those who knew her.

Growing up in Hundsschweif, Bavaria during World War II sharpened her awareness of those suffering or in need around her, and she brought this deep care for people with her when she entered St. Walburg in Eichstätt and later when she came to the foundation in Boulder. As cook in the Abbey kitchen, she did not limit herself to feeding the sisters and guests, but also fed any comers, including dogs, cats, and a local skunk.

Later in life when she no longer cooked, she was still very concerned that those around her were well fed. During many a community supper, she would look up from her wheelchair and spot a sister down the table who hadn’t been served yet. Tilting her own bowl in the direction of the Sister, she would inquire, “Would you like some soup, Sister?” Only after she had offered each part of her supper to each Sister would she eat it herself. Sr. Augustina seemed convinced that all young Sisters were ravenous at all times, and she would save the cookies and candies she received in a special tin in her room. “Not now, Sister, I eat it later,” would be the explanation. But later: “Do you see that box?” she used to whisper conspiratorially to her assistants. “Open it up. There is something nice for you inside.”

Her caring attitude toward people around her extended beyond feeding them. She had a particular knack for correcting with humorous affection. To the Sister who drove her wheelchair with greater speed than grace, Sr. Augustina would say with a playful shake of her finger, “If the police catch us, they give you a speeding ticket!” Another helper cleared her throat excessively. When the racket did not subside, Sr. Augustina said with a twinkle, “I’m terrified! Do you hear the bear growling in here? I think he eats me up!” Once, when a younger Sister was trying to give physical assistance too efficiently, she cautioned her: “Sr. Scholastica doesn’t like it if she has to sew my head back on.” Since she offered rebukes as affectionately as she offered cookies, it was never in doubt that all would be forgiven and forgotten.

Sr. Augustina’s example was one of practical wisdom, and her great love for the Lord shone through it. On Sundays, the Sister assigned to help her after Mass would offer her coffee, a snack, a German magazine, a walk in the garden, and anything else she could think of. The answer was usually an off-handed, “nein!” (“no!” in German). As the assistant began running out of ideas, Sr. Augustina would say at last, “You know what I really want, Sister? What I really want is to go to Church.” It was no surprise when Sr. Augustina greeted her final illness with the same joy and wit as ever. She smiled at her visitors and sang to her helpers as they put her to bed the last time. She suffered bravely to the end. All her cares and quips and efforts flowed naturally from her life of joyous love and hope in God.

But one wintry night a few years before she died, Sr. Augustina herself best summed up this love that fed everyone she met. In the midst of  lively stories of her childhood and merry quips about bedtime, she suddenly paused and smiled at the Sister assisting her. “I think about it so often…I’ll actually look at God,” Sister Augustina said. “I want so badly to see Him…”