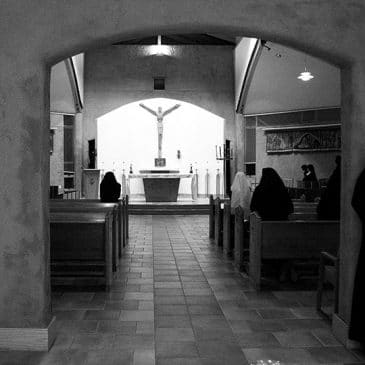 A reflection on the example of Jesus’ prayer by Mother Maria-Michael Newe, OSB

I love the story about Jesus and his disciples on the stormy sea.  It tells us so much about relationships.  We hear that “they had not understood the incident of the loaves.  On the contrary, their hearts were hardened” (Mark 6:52), and after that Jesus makes them get in the boat.  He doesn’t ask them, he just tells them – maybe because He needed that time to be alone, to work through His human emotions.  He was a human man, so He was probably disappointed and hurt at their hardness of heart.  Who knows what all was going on with their hardened hearts, but it’s reasonable to imagine that Jesus was hurt because of it.  Jesus went up the mountain to pray, and what did prayer do?  I think it helped Him overcome those human emotions, and once again go to the need of His disciples.  He didn’t pass by when He heard their cries…He answered them, and He got into the boat with them (Mark 6:51).

Sometimes we have to realize that it is only with prayer can we get through it all, especially in relationships.  Naturally we will be disappointed, naturally we will be hurt, and naturally there will be times when we’re left wondering, “How did that happen?  How was I so misunderstood?”  And then you go and pray about it.  God will help you overcome those human emotions and rise above them, so that you can still act in a Godly way.  It’s such a temptation to run off quickly and tell somebody about our unjust situation.  Instead, try to stop and pray first.  You may still end up telling somebody about it, but after some time in prayer it won’t be quite so harsh.

Prayer is always the best way to start, because Jesus will show you how to overcome the temptation to anger.  Jesus had a just anger in this situation, but that’s not where the story ended.  It’s so important to look at the ending.  He got in the boat with them and calmed the sea.  You can go to Jesus – He’s been through it all.  He truly understands, and shows us His compassionate heart.  Never, never stop praying.