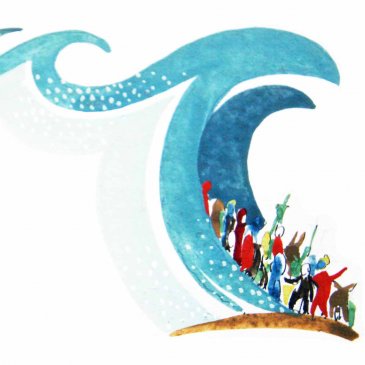 A reflection on following Christ and not looking back, by Mother Maria-Michael Newe, OSB

We hear about Abraham procuring a wife for his son Isaac, and how he tells his servant, “never take my son back there for any reason” (Genesis 24:6), that is, into to the homeland where Abraham was from, because God had promised him a new land.  I think we need to take that message for ourselves as well.  Don’t go back.  Don’t disbelieve God’s word to you.  Everybody’s journey is different, and God is the only one who can follow each one’s journey, because He’s the one who has given it.  He has a specific plan for you, and it’s real.  He has a specific work for you.  You have to follow through with the vocation He has called you to.  Once you say yes and take a step forward, don’t step back.  It’s not about you—it’s the work of God in you.  So don’t look at yourself all the time, because that can get really discouraging—look at God!  Look at the work He is doing in you.  Don’t stare in the mirror; instead, open the window. It’s beautiful out there!

I found a quote in Venite Seorsum: Instruction on the Contemplative Life and on the Enclosure of Nuns, about the spiritual exodus that is required of each one of us:

“From the dawn of the Chosen People’s history, Abraham is depicted as being called to leave his country, his family and his father’s house, while the Apostle repeatedly teaches that the same calling was the beginning of a long mystical journey to a homeland which is not of this world.  What in this way was merely prefigured in the Old Testament, becomes a reality in the New…The Word of God delivered us from the domination of darkness (cf. Col. 1:13), that is from sin, and through His death (cf. John 13:1; 16:28; and Heb. 9:11-12, 10:19-20) He set us on the return road to the Father, who ‘raised us up with him and made us sit with him in the heavenly places in Christ Jesus’ (Eph. 2:6; cf. Col. 2:12-13, 3:1).  Herein lies the true-essence of the paschal mystery of Christ and the Church.”

This exodus is true in a particular way for those whom God has called to the contemplative life, those whom He has set aside for Himself.  God really does say to those He sets aside for Himself, “I ask you to leave everything, and to follow Me.”  It doesn’t matter if home is 10 miles away or another country.  Is it hard?  Of course it is.  But it becomes easier as you get older and heaven becomes closer.  Over time you begin to let go of things more and more, and even when someone you love is dying, you have the sense that it’s okay if God takes her, because you know you’re going to see her again.

So the Exodus really is for every single person.  Everyone experiences and lives through some sort of Exodus in their lives.  But it’s nothing to fear, because you are fed the whole way on the manna.  God is Father, and He is a very good Father.  He will take care.