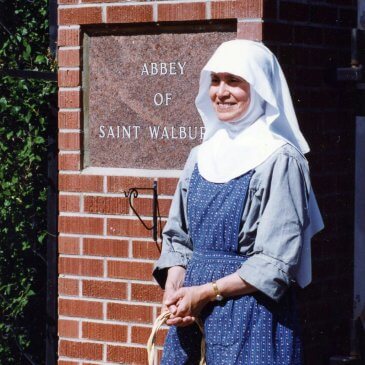 A reflection on the life of Sister Mary Sebastian, OSB, by a nun of the Abbey of St. Walburga

I will never forget the day that I had the opportunity to hear the story of Sister Mary Sebastian’s life.  Knowing what little I did about this fun-loving nun who goes around asking people if they’ve seen her baby picture and then showing them a photo of a monkey, I was utterly shocked when I heard from her what growing up in Whiting, Indiana was like.  For one, she was born and raised in a boxcar.  Her dad worked for the railroad and so they offered for him to live in a boxcar, and he agreed because he didn’t have enough money for anything else.  They were the only Mexicans on that side of town, so at school the kids would hit her and call her African American racial slurs since they had never seen Mexicans before.  She was bullied quite a bit, but she had one friend named Camilla, a big tough girl, who stood up for her.  The same Camilla also taught Sr. Mary Sebastian how to steal from stores, but apparently that only happened once, with a pencil.

With three older brothers, Sr. Mary Sebastian got the last “bed” in the boxcar: the couch.  She was also last to bathe in the metal tub, after all her brothers had already bathed in it, and only once a week.  Her mother made tortillas, rice and beans every day, and that’s all they ate.  They used the restroom in an outhouse.  No electricity.  No running water.  But lots of pet cats!  Sr. Mary Sebastian didn’t let living in poverty get the best of her.  She became the mother to many stray cats, whom she buried in the feline cemetery she created for whenever they got run over by the trains.  Her Birthday was on July 4, so her father told her that the parade and fireworks were in honor of her, and she believed him for a long time.  She also believed that she was born in a cabbage patch because that’s what her dad told her when she asked him where she came from, and she was so proud to tell the kids at school that she was born in a cabbage patch, when all of them were born in boring old hospitals and homes.

My heart broke when she told me about the loss of the brother she was closest to when she was 8 and he was 11, and how her mom died tragically not long after that.

The silver lining of her story was when she started talking about Morris, her husband, who she grew up going to school with.  He asked to walk her home in middle school, but she was so embarrassed about the boxcar that she never let him take her all the way.  One day he sweetly asked, “Will you not let me walk you all the way home because you live in a boxcar?”  She was amazed to find out that he knew all along and didn’t care!  Morris wasn’t Catholic, but he knew how important Sr. Mary Sebastian’s faith was to her, so he secretly went through RCIA in high school and surprised her by becoming Catholic their senior year.  Their plans to go to Florida State with Morris’ football scholarship changed when he went into the Army right after they graduated.  Ironically, instead of sending him to fight in the Korean War, they recruited him to be a dog trainer, even though he had never worked with dogs before.  So he returned home safe and sound after about a year.  They soon married and moved to Hammond, Indiana, where she worked as a switchboard operator and he went to work at the steel mills.  Here it was that they began their family, 4 boys and 2 girls, and they lived a happy life in Hammond until Morris passed away from lung cancer at the age of 52.  Before Morris died, he told Sr. Mary Sebastian that she would become a nun – a prophetic word, it turned out to be.  Two years later she talked to her children about her religious calling, and after that she felt free to pursue what she felt was the Lord calling her to: the consecrated religious life.  She entered a Benedictine community in Illinois that did nursing, and received some training as a nurse’s aid, but sought to transfer to our community after the Illinois community began to struggle.  St. Walburga’s was happy to accept her transfer, and the rest is history.  She made her profession in 1990, and has been a faithful nun of our community ever since.  Her life is truly one of contagious delight.  She brings so much joy and laughter to everyone she meets.  I am truly inspired by the life of this dear Sister of mine – she is the living testimony that, come what may, you can make lemonade when life hands you lemons, or more appropriately, delicious coleslaw when life hands you cabbage.

She was the loving mother to her 6 children: Susan Vandersteen; Michael (Allyson) Geary; Laura Jean Geary; Steven A. Geary; and Benjamin A. Geary; as well as her son, Mark A. Geary, who preceded her in death. She is survived by her brother, Jess (Velma) Sandoval, as well as her gandson, Eric (Nancee) Havill, granddaughters Lauren Vandersteen (Michael Reed) and Kristen (Marcus) O’Reilly, granddaughter Mary Rayburn, grandson Zachary (Samantha) Geary as well as numerous great-grandchildren, nieces and nephews.

She was preceded in death by her husband, Morris Dean Geary; brothers Frank, John, and Peter Sandoval and sister Yolanda Sandoval; and her sisters of the Abbey of St. Walburga.